The Virtual Router Redundancy Protocol (VRRP) is a fault-tolerant protocol that provides for automatic assignment of available Internet Protocol routers to participating hosts. This increases the availability and reliability of routing paths via automatic default gateway selections on an IP sub-network. 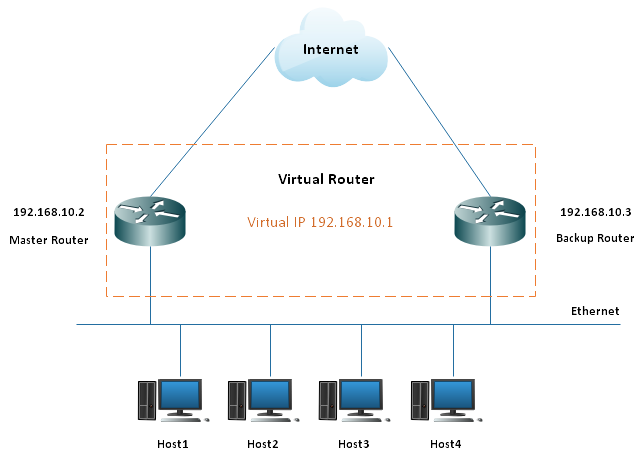 There are several important terms which are VRRP router, virtual router, master router and backup router in VRRP protocol as below.

l  VRRP router refers to the router running VRRP, which is a physical entity.

l  Virtual router refers to the logical concept created by VRRP protocol. A group of VRRP routers work together to form a virtual router. The virtual router is represented as a logical router with unique fixed IP address and MAC address.

VRRP message is used to inform the priority and status of Master devices to all VRRP routers in the same virtual router. VRRP message is encapsulated in IP message and sent to IP multicast addresses assigned to VRRP. In the IP header, the source address is the main interface address (not the virtual address or auxiliary address), the destination address is 224.0.0.18, the TTL is 255, and the protocol number is 112. The VRRP message format as following. 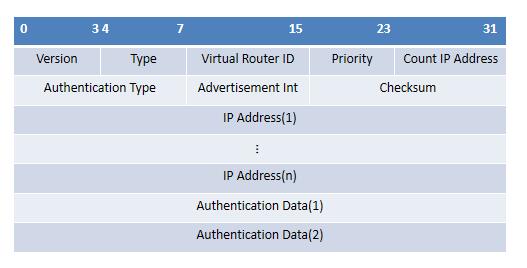 l  Priority. The priority of the router sending VRRP notification message in the backup group. The range is from 0 to 255, however the available range is from 1 to 254. 0 means that the router will stop participating VRRP backup group and use to make the backup router to master router without waiting timeout.  255 is reserved for the IP address owner. The default value is 100.

Each VRRP node can be in one of three states as Initiation state, Backup state and Master state. 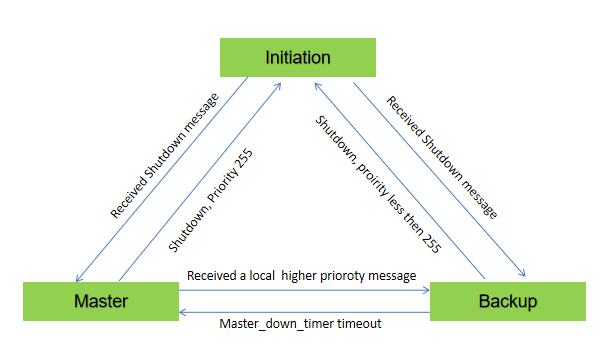 The purpose of initiation state is to wait for a Startup event. When this event is received, then following actions are taken.

When router is in backup state, it will work as following.

1) It will receive the VRRP notification message sent by the master, and judge whether the master status is normal.

2) It won’t respond to ARP request of virtual IP address.

3) It will discard the IP message which destination MAC address is virtual MAC address.

4) It will discard the IP message which destination IP address is virtual IP address.

5) If a message with lower priority is received, it will discard the message and won’t reset the timer.

If a message with the same priority is received, it will reset the timer and won’t further compare the IP address.

6) The router will transit to master state when receives Master_down_timer timeout message.

The router will transit to Initiation state when receives Shutdown message.

When router is in master state, it will work as following.

2) It will respond to ARP request of virtual IP address with MAC address.

3) It will transfer IP message which destination MAC address is virtual MAC address.

5) If the router receives a higher priority message, it’ll transit to backup state.

6) The router will transit to initiation state when receives Shutdown message. 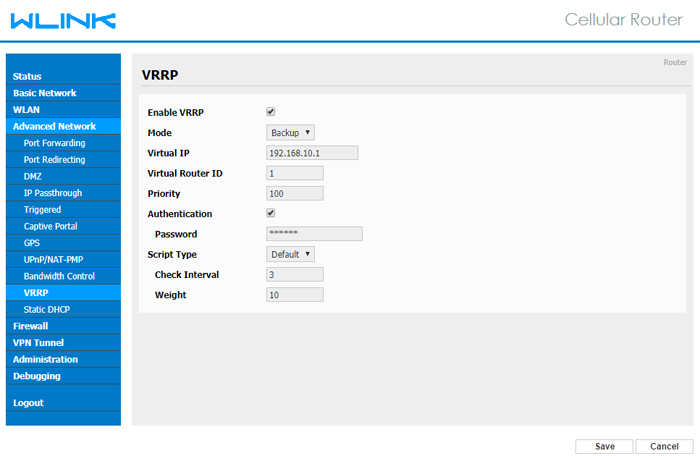